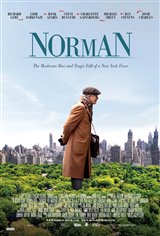 Norman: The Moderate Rise and Tragic Fall of a New York Fixer

Norman Oppenheimer (Richard Gere) lives a lonely life in the shadow of power and money, and constantly tries to make connections to put himself into a position of significance. One day, he befriends lowly Israeli politician Micha Eshel (Lior Ashkenazi), by buying him a pair of expensive shoes. Three years later, Micha ends up becoming Prime Minister, and Norman finds himself in the center of dramatic changes that threaten to destroy the reputation he spent his life building.