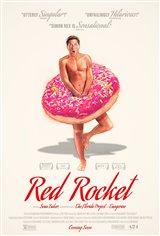 When Mikey Saber (Simon Rex) returns to his small Texas hometown from years in Hollywood and bangs on the door of the home where his ex-wife and ex-mother-in-law live, they don't want him back. However, his glib tongue and non-stop talking finally wears his ex-wife down.

Her mother reluctantly tells Mikey he can stay on the couch, but only if he gets a job and contributes to the rent.

That's when he turns to less-than-legal means to earn some money.