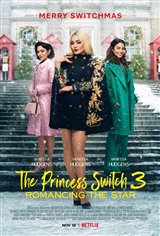 During an international Christmas festival, Margaret (Vanessa Hudgens), the Queen of Montenaro is presented with the Star of Peace, a priceless relic from the Vatican. But when the Christmas relic is stolen, the police have no leads.

Margaret and Stacy (Vanessa Hudgens) team up to convince their audacious look-alike cousin Fiona (Vanessa Hudgens) to help, because she has connections to the black market. Along with Fiona's dashing ex-boyfriend, Peter (Remy Hii), the doppelgängers come up with a plan to retrieve the star.