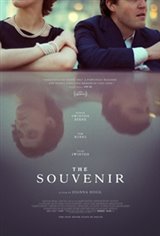 Shy but ambitious film student Julie (Honor Swinton Byrne) begins to find her voice as an artist while navigating a turbulent courtship with the charismatic but untrustworthy Anthony (Tom Burke). She defies her protective mother (Tilda Swinton) and concerned friends as she slips deeper and deeper into an intense, emotionally fraught relationship.

When enough is enough, Julie begins to stand up for herself when their complicated relationship begins to spiral into one of conflict and comes dangerously close to destroying her dreams.