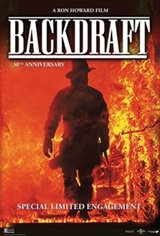 Fathom Events and Universal Pictures are bringing Backdraft to select cinemas nationwide for a special limited engagement. Ron Howard directs an all-star cast in this exciting action-thriller that shows you the mystery, drama and devastation of fire as you've never seen it before!

Kurt Russell and William Baldwin star as two feuding siblings carrying on a heroic family tradition as Chicago firefighters. But when a puzzling series of arson attacks is reported, they are forced to set aside their differences to solve the mystery surrounding these explosive crimes.