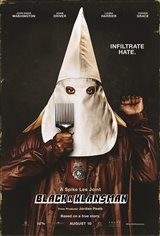 In the early 1970s, Ron Stallworth (John David Washington) becomes the Colorado Springs police department’s first black police officer. When he spots an ad asking people to call the Ku Klux Klan for more information, he dials and reaches David Duke, the Grand Wizard of the Ku Klux Klan. He tells Duke he hates Blacks, Jews, Mexicans, Italians, Irish and Chinese. And anyone else who doesn't have pure white Aryan blood running through their veins.

Through his contact with Duke, Ron discovers that the Ku Klux Klan is planning an attack. He gets Flip Zimmerman (Adam Driver), a white officer, to play him in order to meet face to face with Duke and his fellow Klan members.

Flip asks the members of the Klan what they're planning, but his questions raise suspicions and they make him take a "Jew lie detector" test. Nonetheless, the Klan allows no less than three undercover cops to join their den, as Stallworth and his fellow cops hilariously disprove all their delusions of white superiority.

Based on the autobiography Black Klansman by Ron Stallworth.