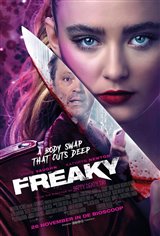 Millie (Kathryn Newton) is just your regular, average teenage high school student, who lives in the town of Blissfield. She gets teased by the popular girls, she's the school team mascot and boys don't notice her. Following a night game, when everyone else has gone home, Millie is waiting for a ride when a creepy guy (Vince Vaughn) in a mask begins walking towards her. He's the Blissfield Butcher and although she runs, he catches up to her. Just as he's about to kill her, something strange happens.

She wakes up the next morning, surprised to find she's still alive, but in the serial killer's body. Not only that, but the psycho is in her body—and rocking it with a new, hot look. Millie discovers she has only 24 hours to switch back, or she's stuck in the killer's body forever.