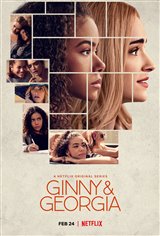 In this 10-episode series, Georgia (Brianne Howey) and her family have been moving homes all their life. Looking for a fresh start, Georgia takes her daughter, Ginny (Antonia Gentry), and her son, Austin (Diesel La Torraca), to move to a town in Massachusetts. Georgia believes this will be a great opportunity to settle down and give her kids the normal life she never had.

But their fresh start to a new life is threatened when secrets from Georgia's past begin to catch up to her and drive a wedge between her and her daughter. Ginny and Georgia have to work through their problems together, as all they have are each other.

Canadian Connection: Filmed in Toronto, Ontario with a partly Canadian cast and crew.;