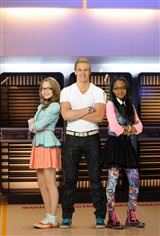 How to Build a Better Boy

High school straight-A students Gabby Harrison (China Anne McClain) and Mae Hartley (Kelli Berglund) get in over their heads when popular girl Nevaeh teases Mae, saying she has a crush on Jaden, a boy Mae is tutoring. Tired of being teased about not having a boyfriend, Mae makes one up.

The only problem is, now people want to see him, so Gabby decides to bail Mae out by creating a virtual boyfriend. She uses a computer that belongs to Mae's father, and what she doesn't realize is that it's set up to create an actual robotic super soldier. However, the way Gabby programmed it, what she creates is a macho but sensitive and super cute boy named Albert, who's madly in love with Mae.