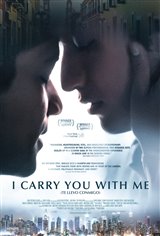 I Carry You with Me

Aspiring chef Ivan (Armando Espitia) lives in Puebla City, Mexico, where he has a job washing dishes. Despite having a culinary school diploma, he can't get a job as a chef so he can make a better life for his son from a previous relationship.

While at a club with his best friend Sandra (Michelle Rodriguez), he meets Gerardo (Christian Vasquez) and the two feel an immediate attraction for each other. However, they have to keep their relationship secret because if Ivan's ex-girlfriend finds out he's gay, she could prevent him from having access to their son.

Ivan decides to cross into the United States illegally in search of the American Dream and settles down in New York City, where he hopes to become a chef and live freely as a gay man. However, he first has to learn English and slowly work his way towards his goal of owning a restaurant, while missing Gerardo and his son.