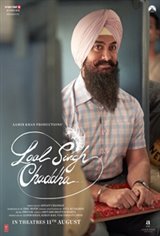 Laal Singh Chaddha (Aamir Khan) is born with with legs that needs corrective braces and an IQ that's a little lower than average. When he goes to school, no one will let him sit with them, except for Rupa (Kareena Kapoor). The two quickly become best friends.

When violence against Sikhs erupts, Laal's mother cuts his hair off so that he will blend in and not be hurt. One day when bullies are chasing him, he begins to run and as his braces fall off, he becomes faster and faster.

After high school, his mother encourages him to enlist in the army, like his father and grandfather before him. There he meets a new friend, Bala (Naga Chaitanya Akkineni).