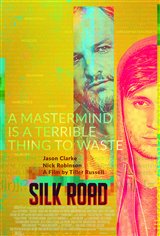 Ross Ulbricht (Nick Robinson) is an ambitious, and idealistic young man who has always wanted to change the world. Ross' goal leads him to create a site on the dark web called Silk Road, an unregulated marketplace to buy and sell illegal drugs using bitcoin.

Just as the site starts to pull in millions of dollars a day for Ross, he catches the attention of DEA agent Rick Bowden (Jason Clarke). Bowden is a lone wolf, and is willing to do anything to take down Silk Road and bring Ross to justice.