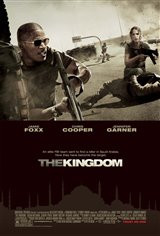 FBI Special Agent Ronald Fleury (Jamie Foxx) has just received the assignment of his career: assemble an elite team (Jennifer Garner, Chris Cooper and Jason Bateman) and go to Riyadh to hunt down and capture the terrorist mastermind behind a deadly attack on Americans working in Saudi Arabia. The feds have only one week to infiltrate and cripple a cell bent on jihad to western society.

No training could prepare Fleury and his team for the disorienting culture shock they face once inside this scorching foreign land--a byzantine maze of profiteering politicians and storefront terrorists. Bound by handlers who refuse to play ball with the U.S., the agents quickly find the local law enforcement more hindrance than help and soon grow uncertain of anybody's allegiance.

But when a sympathetic Saudi police captain helps them navigate Riyadh politics and investigate the true cause of the attack, Fleury finds an unexpected comrade-in-arms. In their lightning fast attempt to crack the case, the partners' search leads them straight to the killers' front door. Now in a fight for their own lives, two teams on opposite sides of the war on terror won't stop until justice is found in The Kingdom.