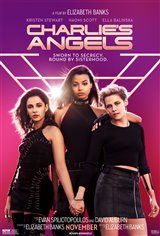 In this reboot of the 2000 feature film, which was in turn based on the 1970s TV series, there are revolving Bosleys, played by Patrick Stewart, Djimon Hounsou and Elizabeth Banks, who also directs.

Sabina Wilson (Kristen Stewart) and her partner, Jane Kano (Ella Balinska), are given a new assignment by Charlie. Their mission is to protect a new client, Elena Houghlin (Naomi Scott), who is the lead programmer on a project that could revolutionize the power industry, but also has the potential to be weaponized.

Elena first meets with Bosley (Djimon Hounsou), but when their meeting is compromised, they need to make a quick escape, along with Jane, who was posing as a waitress. Elena and Jane then rendezvous with Sabina and another Bosley (Elizabeth Banks), who bring her to their base of operations and debrief her. She learns that Jane is former MI6 and Sabina is the main agent who runs the ground game. The agents enlist Elena's help to retrieve the weapon she was working on and gear up for their next mission.