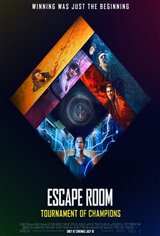 In the sequel to Escape Room (2019), Zoey (Taylor Russell) and Ben (Logan Miller) reconnect in Manhattan to uncover the criminals behind the last escape room that left four people dead. But as they begin to hatch a plan to bring the organizers to justice, everything goes sideways when they are caught up in a new game, this time with four new players.

Zoey, Ben, and the others are brought together unwittingly while riding the subway. They discover that they have all played the game before, making this round a "tournament of champions." Each player survived their first escape room for a reason, and in this sequel they must work together with their unique skillsets to survive the life-threatening challenges that are once again life or death.