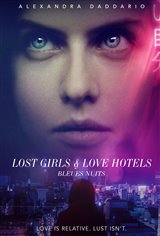 Margaret (Alexandra Daddario) is an American expatriate living in Tokyo, Japan. By day she works as an English instructor for flight attendants at a Japanese flight academy, and by night she is a heavy drinker, seeking submissive one night stands with local men using the city's numerous love hotels.

One such encounter comes with a yakuza enforcer named Kazu (Takehiro Hira), with whom she begins a relationship. However, it's a tumultuous one and sends Margaret spiraling further down into hopelessness as her life in Japan begins to unravel around her.