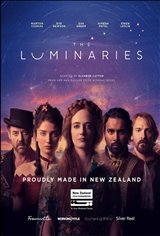 Anna Wetherell (Eve Hewson) and Emery Stains (Himesh Patel) arrive in New Zealand in the 1860s on the same ship to search for gold. Feeling an instant connection, Emery writes the name of the hotel he's staying at and invites Anna to join him for dinner. She agrees and they part ways to settle in at their lodgings.

However, Anna is the victim of a young thief, who grabs her bag and runs. Lydia Wells (Eva Green) stops the boy, gets the bag and hands it back to Anna. She invites Anna to join her that evening, but Anna tells her she has other plans and shows her the note from Emery. Lydia realizes that Anna can't read and reads it for her, but purposely tells her the wrong hotel. Not only that, but she's stolen Anna's purse from her bag, which leaves Anna unable to pay for her room. Finding herself out on the street, she goes to the wrong hotel to wait for Emery. When he doesn't show up, she goes to Anna's and is offered a job.

Meanwhile, Emery doesn't know what happened. He felt a connection with Anna and knows she wouldn't have stood him up. When he's told a lie by a compatriot of Lydia's, that Anna has left on a ship for another island where gold has been found, he goes after her.